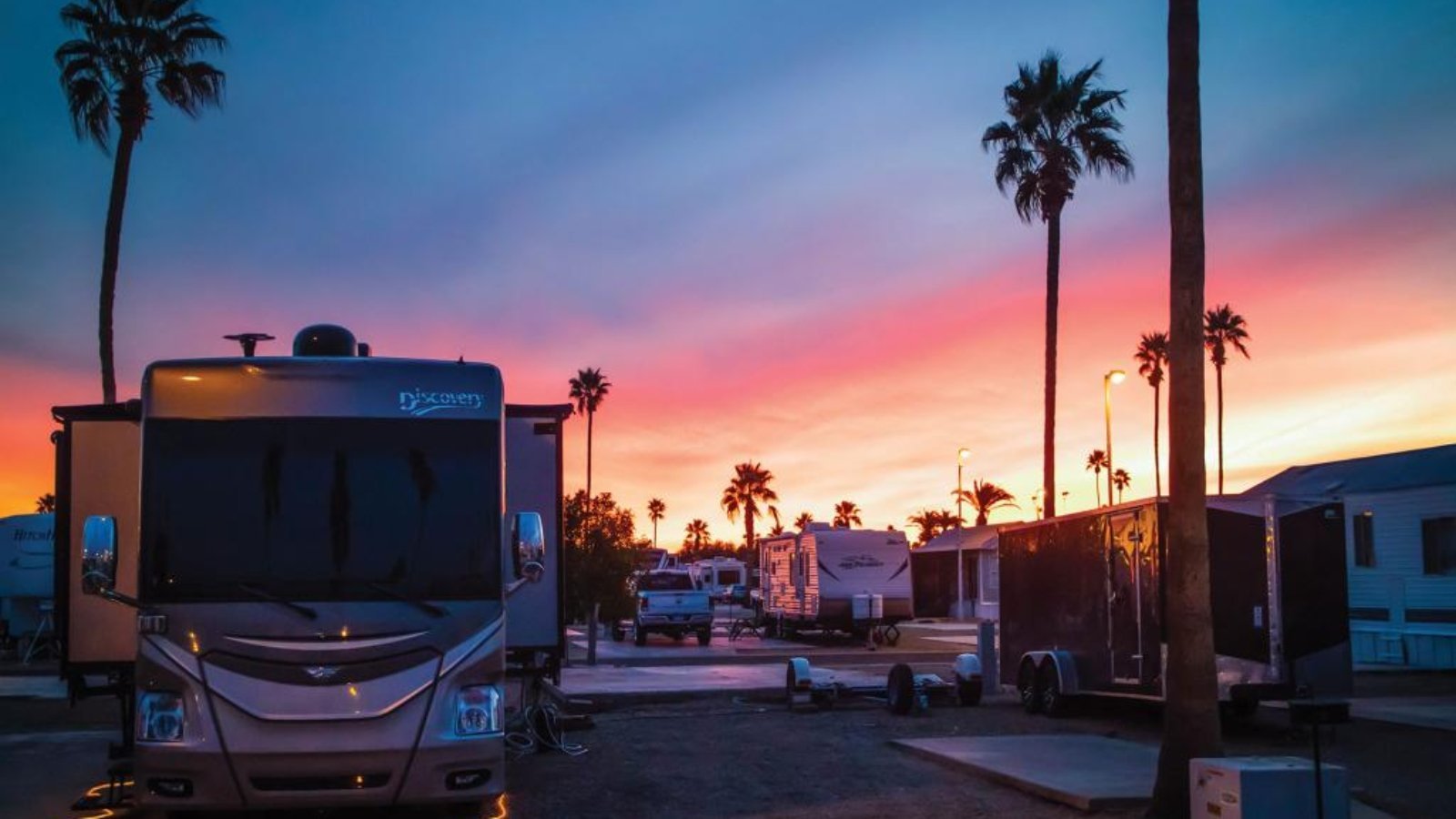 For electrical contractors located near leisure areas or national parks, consider working at recreational vehicle (RV) parks. Like mini towns or allotments, RV parks require the same type of electrical work as most other jobs—upgrades, renovation, replacing transformers—albeit with more consideration needed for weather, terrain and the vacation season. Many electrical contractors, especially those out west, are taking advantage of this work.

The company usually does two or three complete jobs a year that involve total upgrades, and it also does a lot of regular maintenance and repair work.

“Some of these parks that have been around since the 1960s are at ‘end of life’ when it comes to electrical work,” said Ryan Taylor, project manager. “These are the parks where we do total upgrades and replacements.”

The company is currently involved in a full replacement project of a facility that consists of 420 units on 180 acres with six and a half miles of ditch. This involves working with the local utility to get new transformers installed, all underground cabling and vaults, and the installation of new distribution panels and pedestals.

“We will end up installing 49,000 linear feet of direct-bury cable,” Taylor said.

While Mills Electric finds it easy to work with the local utility, this kind of work is new to some cable and internet providers, according to Huntley, so there is a learning curve and requires some coordination. In particular, rough terrain en route to the park sites can cause issues.

“We are in the woods, and there are trees all around,” Huntley said.

This makes trenching difficult for some of these providers. Also, in a lot of cases, underground wiring isn’t well-documented.

Huntley said he hasn’t seen any demand for solar or other types of renewable power.

“Most of the people are here just to get away, and they want to be deep in the woods, where it really doesn’t make sense to install renewables,” he said.

Huntley said that lightning protection comes down to climate and historical activity.

“The east side of Washington state is drier and has more lightning strikes. We recommend looking at it on a site-by-site basis and address the risks with clients,” he said.

For Mills Electric, the biggest challenge in terms of working on RV parks is weather.

“Most of the people want to be in the parks in spring and summer, so we do most of our work in the fall and winter, which tends to be very wet around here,” Huntley said. “We have to deal with a lot of mud.”

However, there are only two things that would really stop the company from working on any given day. One is really high winds, which could knock trees down, and, that, of course, would be a safety hazard.

“We also have to stop working when it gets below 28°F, because the trucks that come in to do the trenching for the underground cable aren’t able to work in those conditions, because the underground water is too cold,” Huntley said. “It crystallizes as it gets sucked up into the tank.”

“In fact, working on these jobs is among my favorite things to do, because they are in such great locations,” said David Bradshaw, department manager.

In terms of frequency, the jobs tend to “come in waves,” Bradshaw said. “There may be some years where we do several, then other years where we end up doing none.”

Much depends on RV park owners. Some owners have several parks and want Quality Electric to do work on several of them during the year. Other years, it might just be a one-off at a small park.

On the large jobs, one key aspect is working with the local utility and setting the high-voltage transformers.

“In some cases, on large projects, the utility will end up having to upsize its lines and the transformers that serve the parks,” he said. In addition, some of the large RV parks have their own indoor electrical rooms.

Project size can grow in other ways, too.

“Years ago, we tended to install 30-amp pedestals,” Bradshaw said. “Then, we started installing 50A. These days, it’s not uncommon for us to install 100A pedestals.”

The company also may need to trench in larger conduits.

Quality Electric experiences some of the same challenges that Mills Electric does, especially when it comes to the fact that a lot of the work needs to take place during the colder months. It can be tough to work during the summer when visitors to the parks want to relax and not have a lot of contractor activity around them.

Location can be another challenge.

“A lot of these parks are in remote locations,” Bradshaw said. “For example, we have had to drive hours just to get to a location in order to bid on it in the first place.”

And, when a project does occur, there can be occasions where the crew will run into a lot of rocks and will have to rock-saw their way through the area in order to dig trenches.

However, most utilities that serve the parks where Quality Electric works are very easy to coordinate with so that makes the job go smoothly.

While demand for renewables is not large, the company does occasionally do RV park projects that involve solar.

“These tend to be federal parks, because they have a lot of requirements for energy savings,” he said. “We did one project that involved installing a rather large solar farm.”

“I received a call from a general contractor one day who was working on a park project on Mt. Hood and wanted us to bid on it,” said Dan Petrin, project manager and estimator.

The company ended up getting the job. It completed work on the first phase, which took place in 2017 and involved 80 sites, and is currently working on the second phase, which involves 108 additional sites.

The first phase’s first step, and one of the most challenging, was working with the utility to arrange power. Until then, the region where the RV park was being located had a low demand for power.

“So, the first thing, was getting all of the transformers, vaults and other utility requirements taken care of,” Petrin said.

Another challenge related to the other utilities—water, sewer, cable and internet—that were also working on the project.

“The owner wanted each site handled separately, which means separate metering, water lines, cable drops, etc., which makes things interesting,” he said. “As such, we had to spend a lot of time working on the design. It wasn’t just a matter of running a long extension cord from the highway to the park!”

A third challenge related to weather.

“We started both phases late in the year, which is when there is a lot of rain and then a lot of mud,” Petrin said. “And, of course, when a storm comes through, all work stops until emergency services are taken care of and then we can get back on schedule.”

While lightning protection might be a consideration in remote areas, Petrin said such strikes are minimal in Oregon, compared to other parts of the country.

“This RV park being surrounded by 100-ft. trees that are typically wet will be the best protection, as they will likely get the strikes.“

“If the opportunity arises for more RV park work in the future, we would definitely consider it,” Petrin said. “The owner of this park actually owns other parks all around the country, so more work may be possible, especially if he is interested in work on some of the local RV parks.”

Most of the RV work that J. Pollock Electric, Overgaard, Ariz., handles is with existing parks that need pedestal repairs.

“We also do a lot of work with RV owners who need new wiring,” said Jesse Pollock, owner. “We haven’t ever wired a park from scratch.”

Pollock finds that there is always enough work to keep him busy, because he focuses a lot of attention on marketing.

“For example, I go around to RV parks and give business cards to the park owners, and the park owners then give my information to the owners of the RVs, who then call me for work,” he said.

Some park owners actually own several parks, so Pollock’s marketing efforts with a single individual can pay dividends with work in several different parks over time.

Another way he gets new work is by putting on seminars at various parks, informing people of new products and technologies, such as surge protectors, which can vary by location, and which, he said, are becoming more important.

“There is a lot of equipment being offered by different manufacturers, so I spend time reading their manuals,” he said.

As noted, most of his work is traditional.

“Some of these parks have been around since the 1930s,” he said. “A lot of it is still above-ground wiring.”

While some park owners have thought about moving to solar plus battery, none of the ones with which Pollock has been involved with have moved this direction yet.

His biggest challenge is often scheduling.

“The town and surrounding community can double in size from about 15,000 people to 30,000 people at certain times of the year, so demand increases a lot then,” Pollock said. “As a result, I just need to figure out a way to schedule everything and get the work done. If I get really busy, customers often just have to wait.”